Kayla
This past week has been a shoeless, smelly shuffle of my favorite articles from day to night. It’s been one week since we embarked on our Study Abroad, At Home Edition project and I have never wanted to do laundry more than I have this week. I severely missed my token pajama shorts once they got to the point of the dire need of washing. I spent the majority of this week tide-to-go-ing salsa off my white pants and freezing shirts to to remove the stench of long walks.
Laundry Challenges
I am a “wear every piece of your clothing before doing laundry” person, so having a limited wardrobe brought up some serious questions about how I’ve been taking care of my clothes. According to a Business for Social Responsibility Report, “laundering accounts for 40-80% of total life cycle greenhouse gas emissions for garments.” This is huge!! And great!! It means that while we can’t always fix the systemic problems in the fashion industry, we can make an impact by fixing how we use and care for our clothes.
This week, I’ve been trying to keep my clothes as clean as possible without washing them multiple times. There are countless ways to make your laundry habits more sustainable and less energy-intensive. You can make dryer sheets at home by infusing flannel squares with essential oils, or spot-treat clothing stains, or change the washer setting to “cold” so all clothes, despite their color, can be washed together, minimizing the number of loads (this sent my mother into a frenzy when she witnessed it). My favorite new washing technique is freezing clothes! Yes, just like what you do with dino nuggets or eggos. Leaving a pair of pants in the freezer for one day and kills all the nasty the bacteria without having to use any extra water or soap.
Athletic Wear and Body Image
This week has also brought some insightful observations on the innate connection between clothing and body image. My packing list explained that for many of the small towns in Indian Himalaya, yoga pants and clothing made from spandex material are not socially acceptable for women to wear. While this initially sparked that angsty middle-school-dress-code kind of anger in me, I took a second to question what western feminist ideals I was projecting onto a culture that I had only briefly read about. When I packed for this three week experiment, I intended to wear the sports bra underneath shirts, but after looking back on my outfit choices from the past week, I realized I’ve become extremely accustomed to wearing them on their own, something I would have never done while studying abroad.
In Los Angeles, athleisure is trendy. Wearing athleisure is almost a sign of success; the movement is deeply tied to the ideal new modern woman. You know, the one who has a dream job, looks like a Reformation model without trying, drinks green juice, eats at Sweetgreen because she’s always on the go, and somehow squeezes a yoga practice into her schedule. And to do all of this, she incorporates athletic clothing into her everyday outfit to save time. It’s marketed as the “practical” yet cool way to dress. But, after spending this past week wearing athletic clothing all day, I’ve come to realize that oftentimes, athleisure is wildly impractical. Bike shorts give you wedgies if you sit in them for too long and sports bras cut into the sides of your ribs while they push out any fat, skin, and other bodily parts out of the edges, squeezing out any “flaws” to the forefront.
On the days that I wore cropped sports bras and tight shorts, I found myself searching for my image, and more importantly my flaws, in reflective surfaces far more frequently than on the days I wore comfortable, loose, and conventionally less flattering clothes. Athleisure clings to the body and more importantly, to the idea of self-policing. I recently read an article by Mark Greif titled "Against Exercise" that explained how we still participate in the same kind of unrealistic standards today as Europeans did centuries ago with fainting-inducing corsets—our way of attaining these standards just on a different form. The modern corsets are now internalized, maintained with crunches, disguised by “clean eating”, and enabled by many articles of athletic clothing that intentionally reveal every inch of the body.  This led me to question the constant overwearing of my athleisure clothing that seemed so practical, yet created so many unnecessary distractions.
This week's swap
With this new acknowledgment of the role that clothing plays in my own self-policing, I decided to swap out a pair of yoga shorts for a pair of rollerblades. I find it comforting to think of my articles of clothing as functional necessities that I employ to carry out a task or show a message. Sometimes, that task is demonstrating my serious side with a classic button-down shirt while other times it’s my fun and (slightly) athletic side represented through cyan roller blades (btw, if you’re in the market for any sports gear, Sideline Swap is a great website that sells barely used gear). My clothing should never represent my insecurities and promote negative self-talk.
This past week taught me a ton about my own interpretation of the best time and place for certain clothes. When biking, I’ll wear my bike shorts. When doing yoga, I’ll wear my yoga pants. When taking a midterm, I’ll wear a serious button-up and comfortable sweatpants. Looking at my wardrobe in terms of utility has made it easier for me to prioritize my clothing, by letting go of some of the more impractical pieces. I’m beginning to see the value in a limited wardrobe, but not to the point that I’m compromising my self-image to save myself from owning a few pairs of pants that serve different uses. 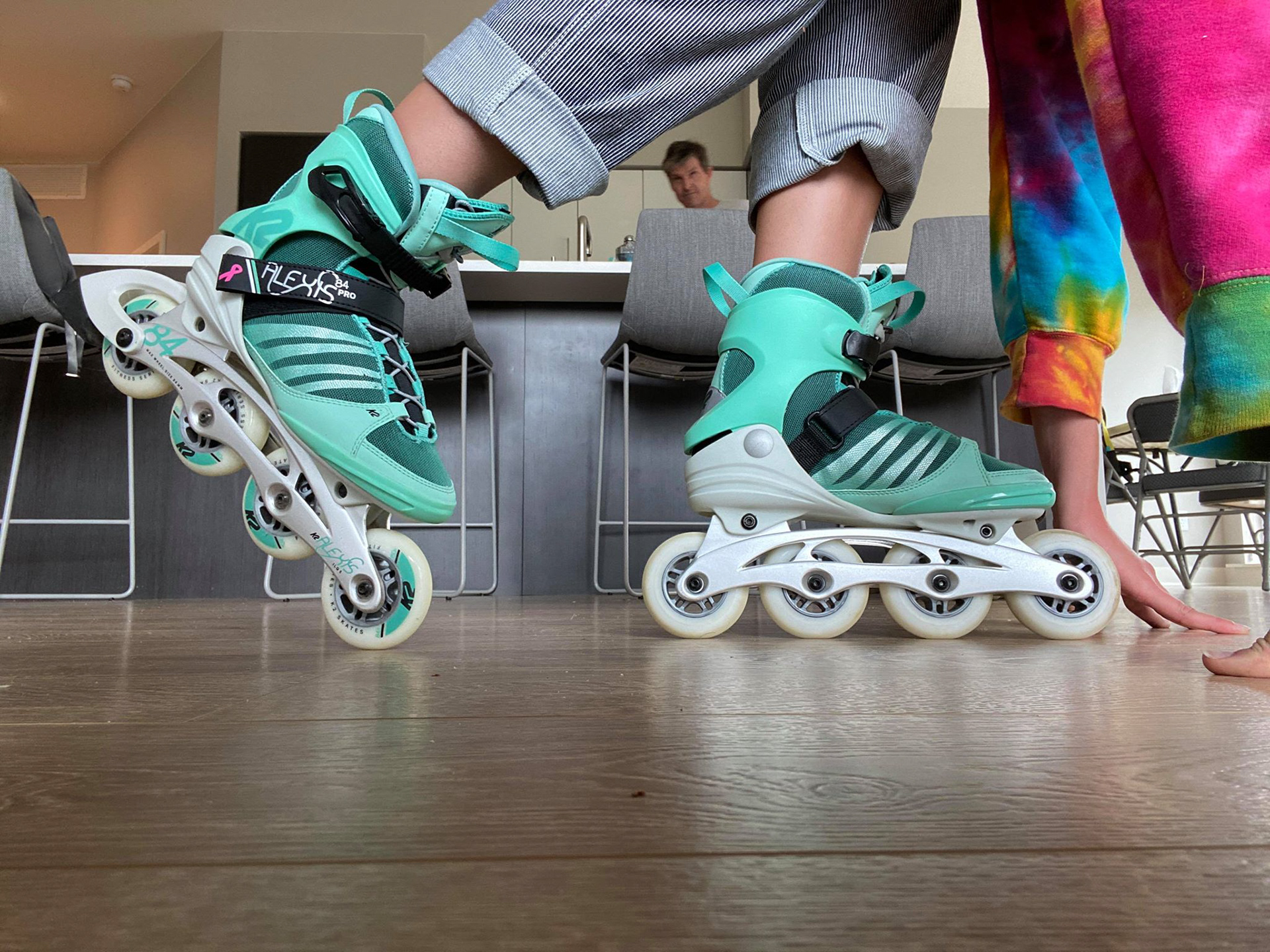 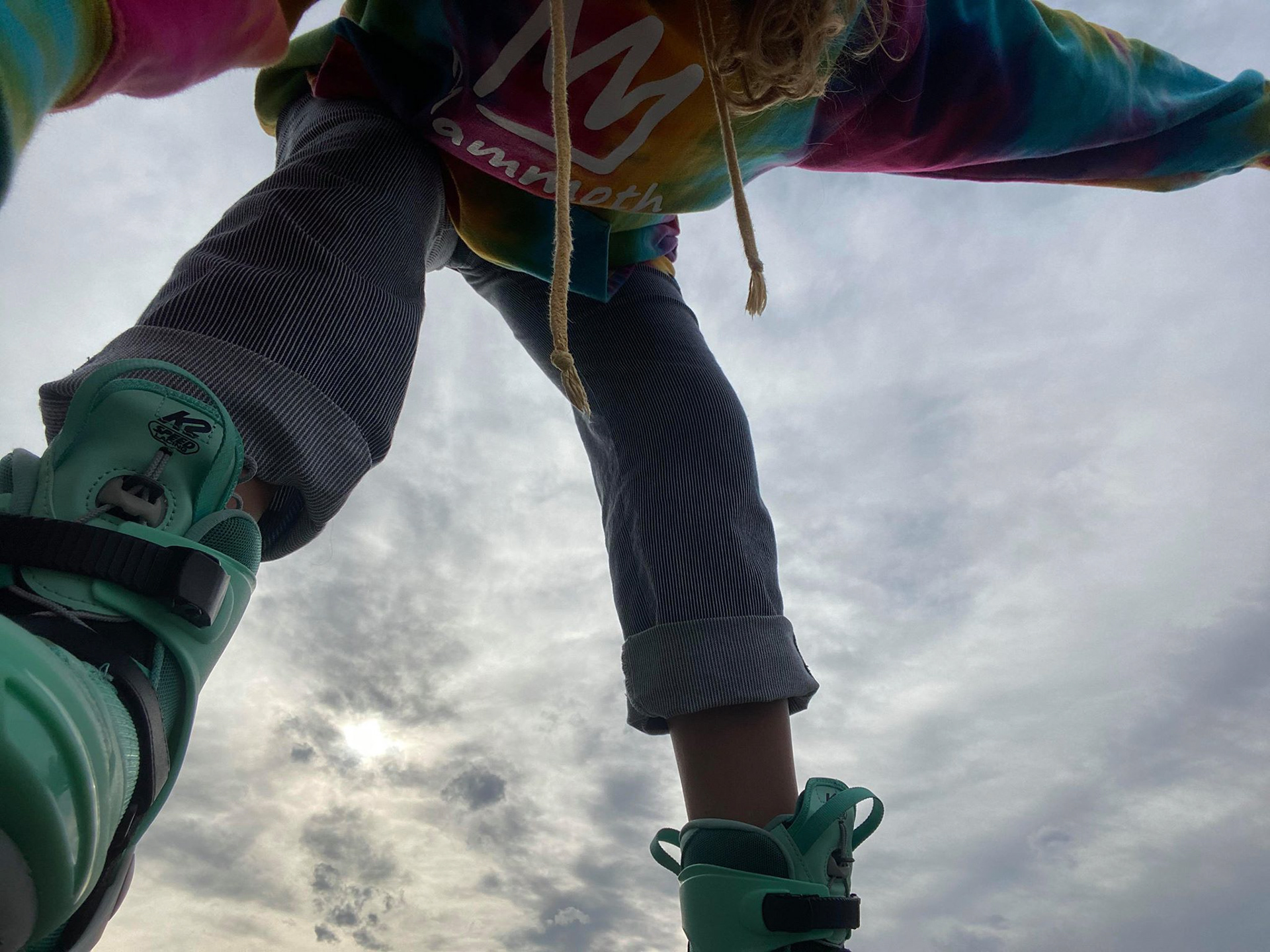 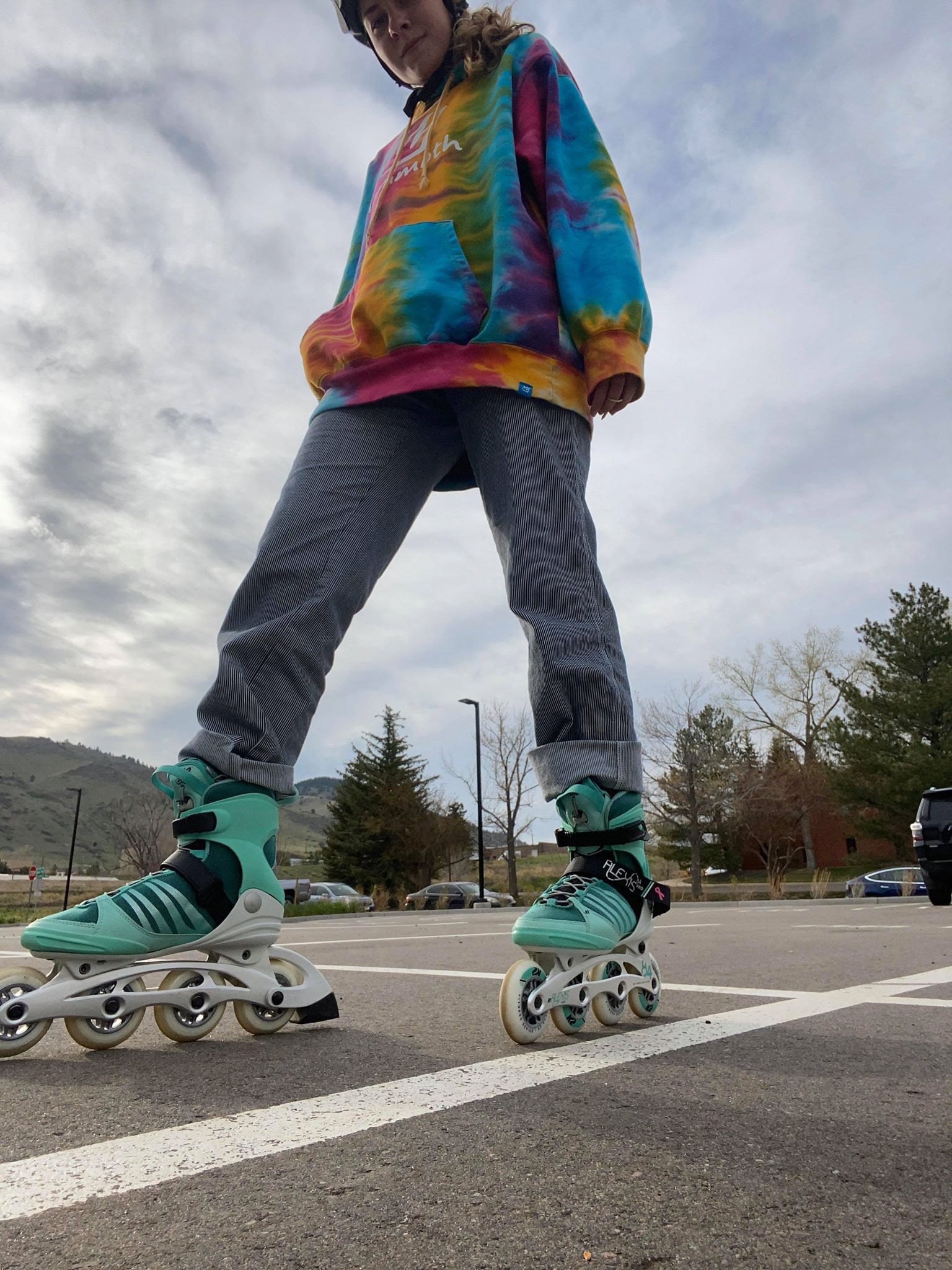 Emily
Studying abroad is an adventure of a lifetime, but if you plan on practicing minimalism, you will need to plan for challenges you may face with the limited amount of items you have. Caring more about your experiences than your possessions in the end will bring significant satisfaction to your life and enrich your traveling experiences.
Laundry challenges
It was difficult to be disciplined in doing laundry every two weeks with the amount of schoolwork and events on my plate like cèilidh, Wetherspoons hangouts, or bagpipe concerts. I was barely at my flat, so I had to plan around my schedule and other people’s schedules to utilize a washer and dryer with no setbacks.
Laundry was challenging to do sustainably while abroad. I wanted to hang dry my clothes, but it rained so frequently and I only had the small space of my flat (with no balcony or yard), which left me with using the plain-old washer and dryer. I did not learn about portable laundry products until after studying abroad, but if I were to go back, I would use something like a Scrubba wash bag. This wash bag is perfect for the outdoors, and I plan on returning to Scotland in the future to do a 100-mile hike in the highlands (on the West Highland Way) where I will be able to make good use of it then.
Versatile Outfits
When planning outfits, It is important to think about what activities you plan on engaging in during your study abroad adventure. I knew it was going to rain in Scotland, and I knew I was going to be hiking, biking, and walking often, so I made sure not to waste any space with summer clothing even if they were super cute. My carry-on was packed with water-proof, sturdy, and warm clothing that I wasn’t afraid to get dirty.
The following photos show my main outfits for different types of weather and outings.​​​​​​​ 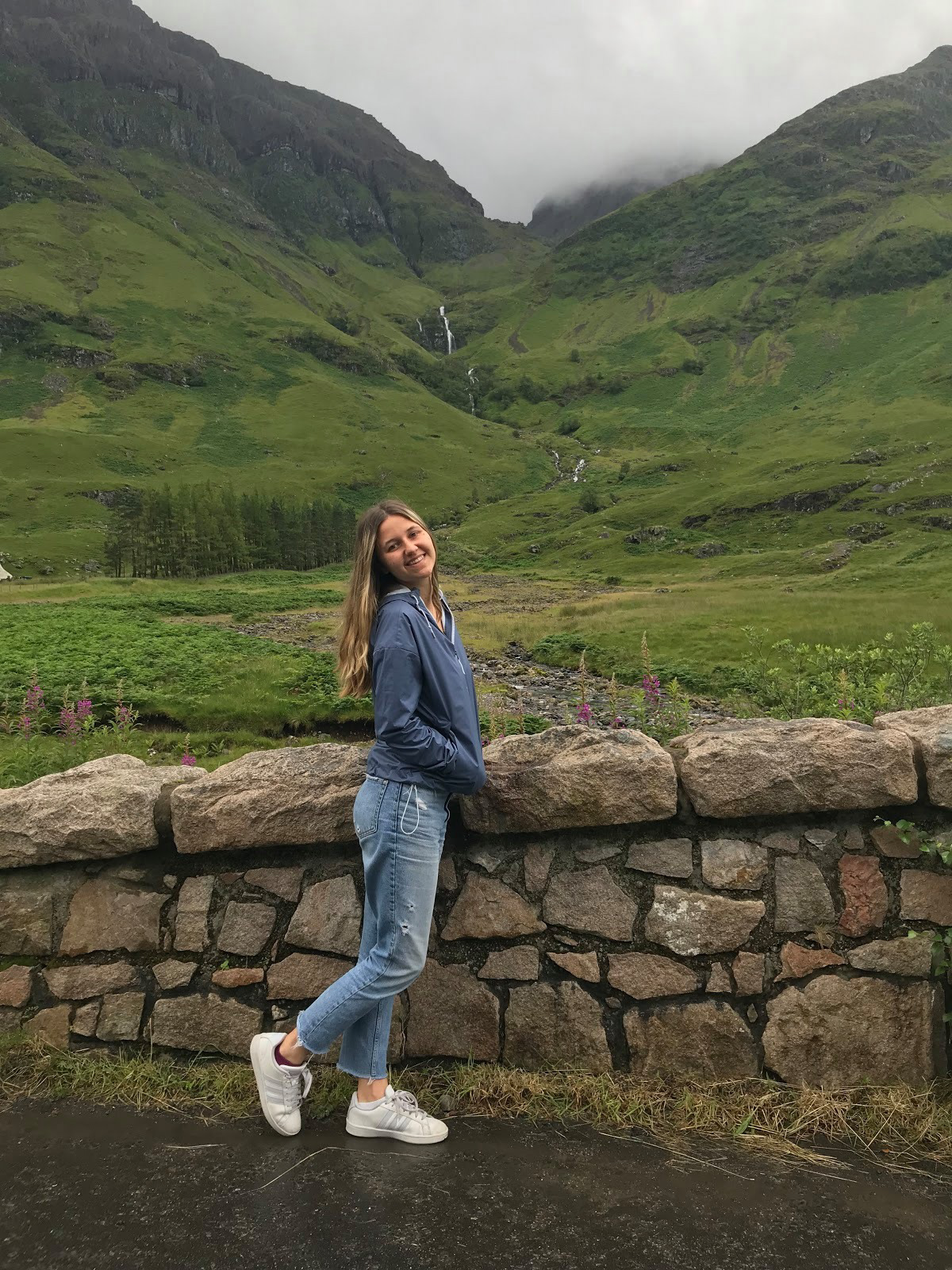 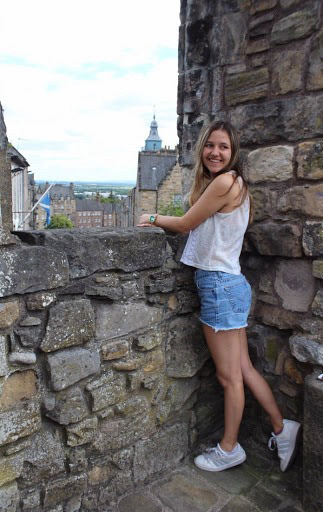 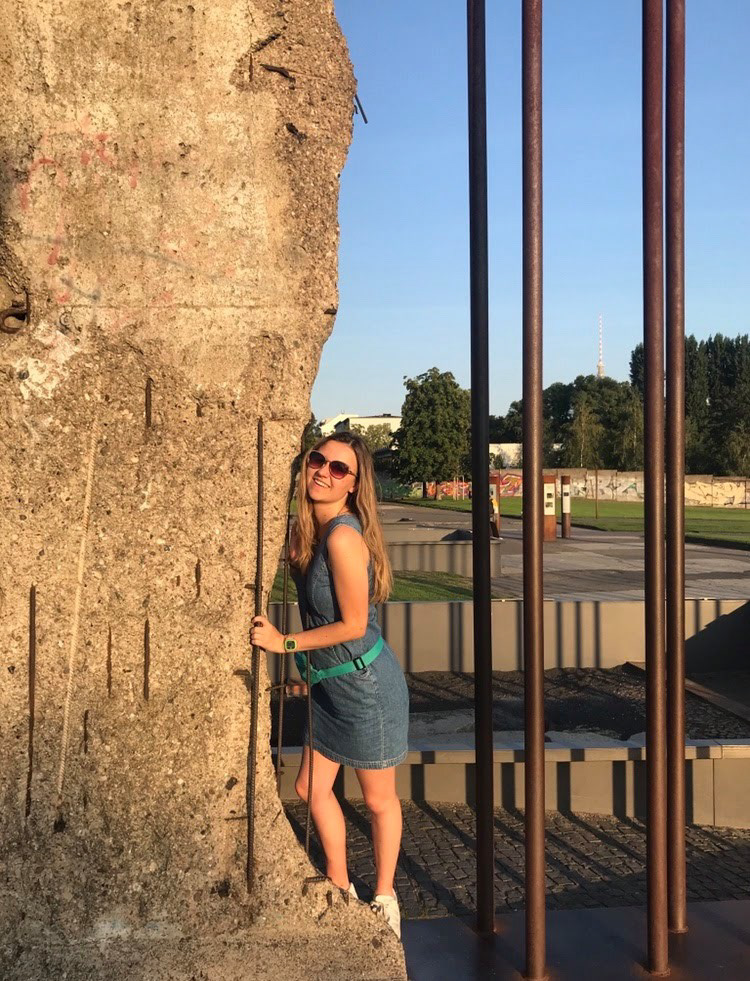 Friends and shopping tips
The friends I made in Glasgow loved to shop. We often spent evenings after class shopping in Primark or TopShop, which was extremely tempting. The discipline was easy to acquire though, considering I had NO SPACE to fill my bags with any more than what I brought. My friends ended up dropping over $500 on clothes and over $100 in shipping fees to send home their purchases since their bags were overfilled. So, I saved a lot in terms of clutter, stress, and money by avoiding shopping for clothes. I spent my money on more sentimental items like tulip seeds from Amsterdam or a reusable tote bag with a pattern of Highland Cows, cows that are native to Scotland and have a signature mane of hair. I felt these items would go to practical use in my home and would never go out of style like clothing would.
Hostels and public transportation
I did not bring anything of value to me on my study abroad trip except my phone and my passport. Hostels and public transportation are places where there is less security and space for expensive baggage, and if you want security, you have to pay a premium fee. In hostels, I left my baggage near my bed and brought my valuables with me in my fanny pack wherever I went. I also was not anxious or worried about my luggage in airplanes and trains. Leaving valuable possessions at home helped me practice mindfulness by letting me live for the moment instead of living for my possessions. I was careful about purchasing anything while abroad (except food and flat necessities) because I wanted to be mindful about what would truly bring value to my life. The souvenirs I bought--the Amsterdam tulip seeds and reusable Highland Cow tote--were items that I knew would bring great happiness in my life, especially since I was moving into a new apartment following my return to California where I could plant the seeds and use my tote for grocery shopping. Clothing stores did not appeal to me such that I felt that I had everything I needed.

This photo is my dog greeting me after I came home from study abroad. It’s the only photo I have that showcases the size of my carry-on! I think I could have gone smaller than that. My boyfriend who came for 2 weeks only brought a backpack!
If you have any questions feel free to email us or DM us over instagram. I loved my study abroad adventure so much, and I hope I can provide you with insight on how to practice minimalism and mindfulness during your travels.
↑Back to Top